“A professional player shot in the back,” announces the special edition of Tombstone Epitaph. Nothing but mundane, with one detail: the player is called Blueberry, a real celebrity, according to fat Campbell, a Boston journalist.

But with three bullets in his body, Blueberry is not dead. And as soon as he opens an eye, Campbell rushes to his bedside to collect his memoirs. It doesn’t start well: the first feat of the “hero” of the West is to take a bit, wallowing in the mud with the pigs…

Meanwhile, Strawfield celebrates with fanfare the departure for Tucson of his silver convoy, with the Clantons set to attack, disguised as Apaches. And while Geronimo’s shadow lurks in the hills, the drama is set: it will lead to the famous massacre of the OK Corral.

Shadows on Tombstone, which was the subject of a summer pre-publication in Le Monde, is built on a challenge: the hero, taped to a game table in Mister Blueberry, spends this episode nailed to a bed. This does not prevent Giraud, alone at the helm since the disappearance of Jean-Michel Charlier, to lead the action as a virtuoso, with his tribe of irresistible characters and his usual dose of humour. As for the drawing, it lives up to the Master’s reputation right down to every corner of the décor – from Ma Clanton’s charming little interior to the hero’s bed.

Mister Blueberry’s suite, Shadows on Tombstone is a masterpiece in which the talent of the immense Jean Giraud explodes on every page. This album is at the same time a rereading in the form of a black novel of THE famous duel of OK Corral, a virtuoso questioning of creation and legend, and, above all, a western twilight imagined by a creator sure of his art. Every bande dessinée enthusiast must own this very large black and white edition.

The publication notes the following on its colophon page; as with all translations shown here, my limited French and Google Translate are poor substitutes.

This black and white edition of Shadows on Tombstone uses the original boards of Jean Giraud. These were completely rescanned so that the maximum details – fineness of the features, grays, densities of the hues of black, precision of the backgrounds, and the few corrections of the author – could be seen. The 30 * 40 format, larger than the classic publication format, will help you find some of the incredible feeling that comes from viewing the origins of one of the greatest artists of bande dessinée.

Scan quality is good: clear and well defined with no visible artefacts. There appears to be a contrast issue, with the blacks not dark enough. Hard to tell if it’s the scans or the printing, as it’s not every page. Some pages have a grey tone to them but only in within the panels. Lots of corrections throughout, either with correction fluid or paste-ups. In several panels we see pencils where Giraud worked something and then changed it for the final inks. No margins notes. Blacks show some gradients.

The design follows what was previously established, with no interior colour and four black double page chapter dividers featuring enlarged panels. These emphasize the greyness of the panels. The only colour is the brown spine and back cover. Based on edges of word balloons being cut off the art was cropped around Giraud’s standard page framing and the white border added.

Production is quite good: glued binding of thick matte paper. The book lies flat when the center is smoothed, but this also shows the weakness of a glued spine on such a large book.

This series from Dargaud is quite impressive for the price. Yes, I would prefer a hardcover with a sewn binding, but that would double the price. I would pay that premium in a heartbeat. These are available from French language retailers but these early volumes are getting hard to come by. 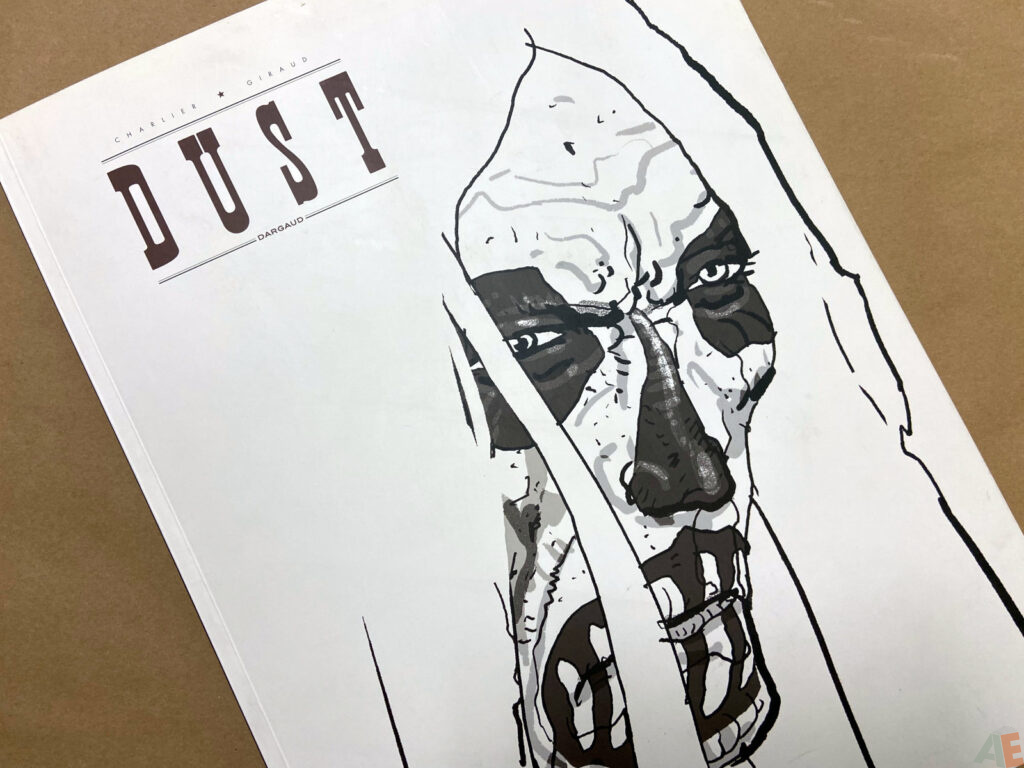 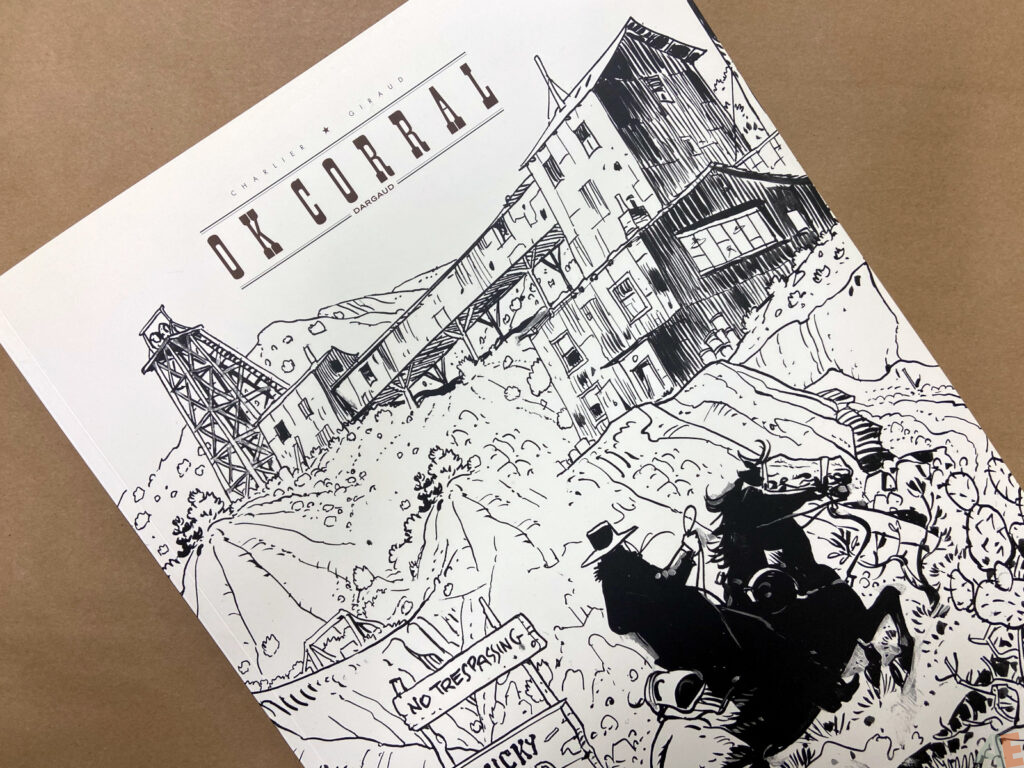