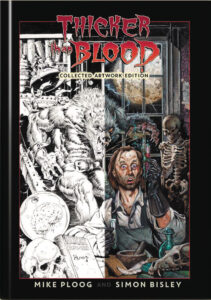 The Thicker Than Blood Collected Artwork Edition is an oversized 12″ x 17″ hardcover art book that collects and reproduces all of the original artwork that was produced for the three-issue comic series. In this book, for the first time, each stunning page is published at full size. This is an “original art-sized edition” unlike any before it. Not only does the book reproduce the art at the original size it was created, it also represents the work of Two artists, not just one. Further, it covers the mediums of line and paint, side by side, containing the equivalent of six issues: three issues of beautiful pen and ink line art by Mike Ploog and three issues of fully-painted art by Simon Bisley, as well as twelve covers, six by each artist.

As with all original artist’s gallery editions, this is a collection of classic comic material and I’ll be reviewing the book and not the story. For a complete list of all current and announced editions, with review links, please visit our Index. 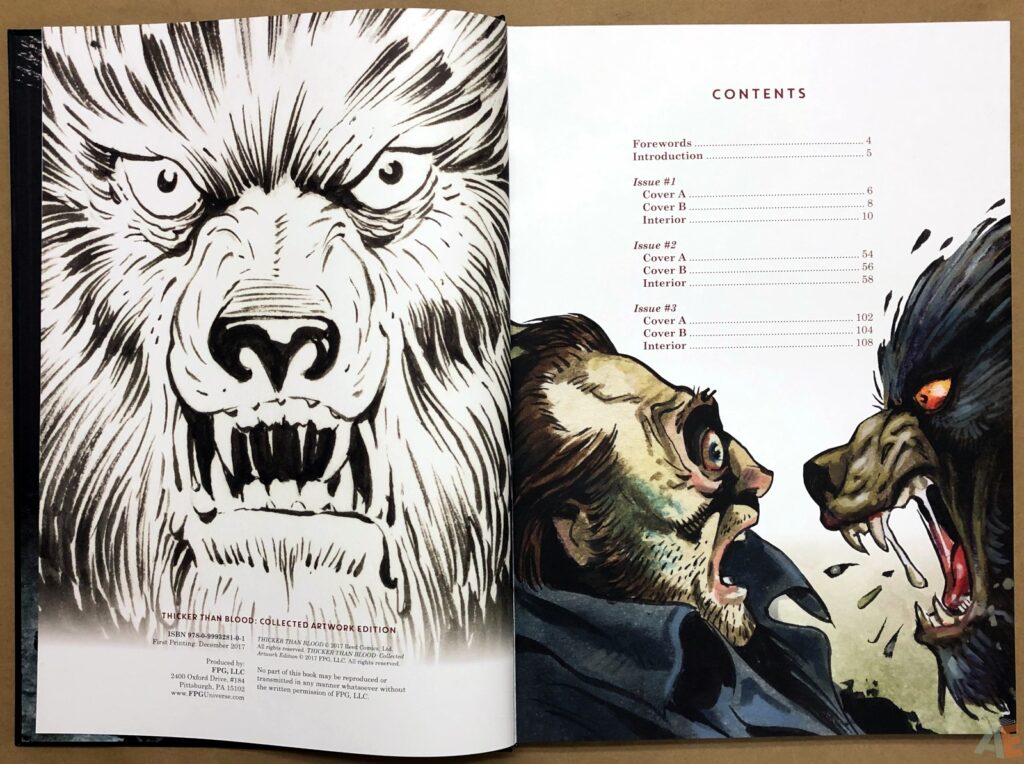 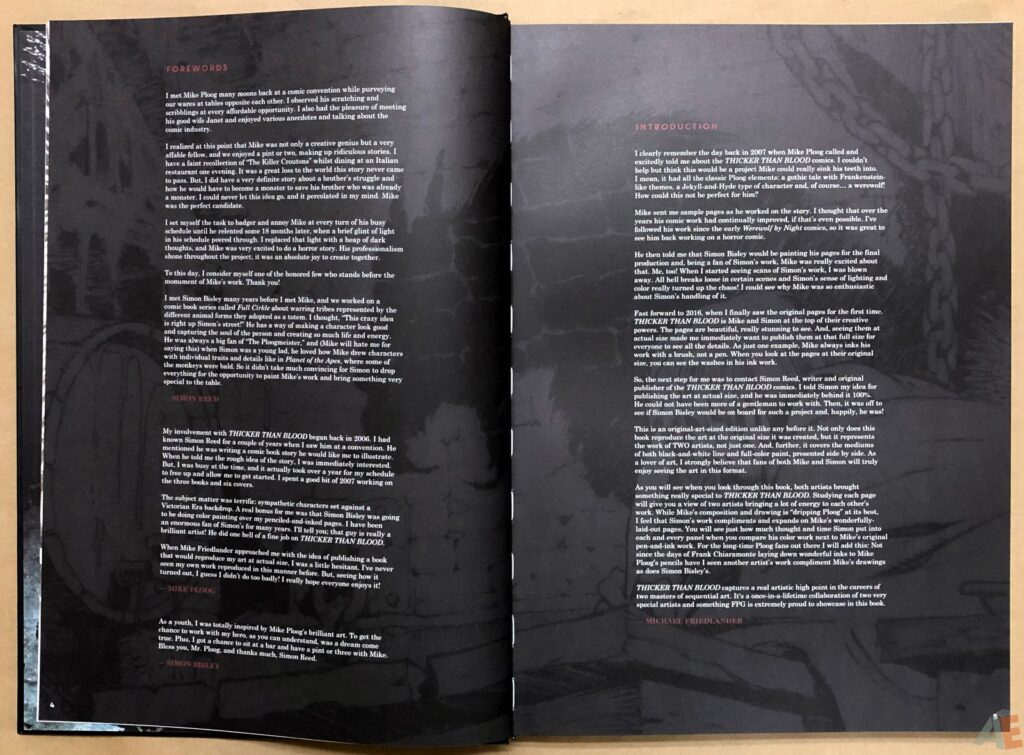 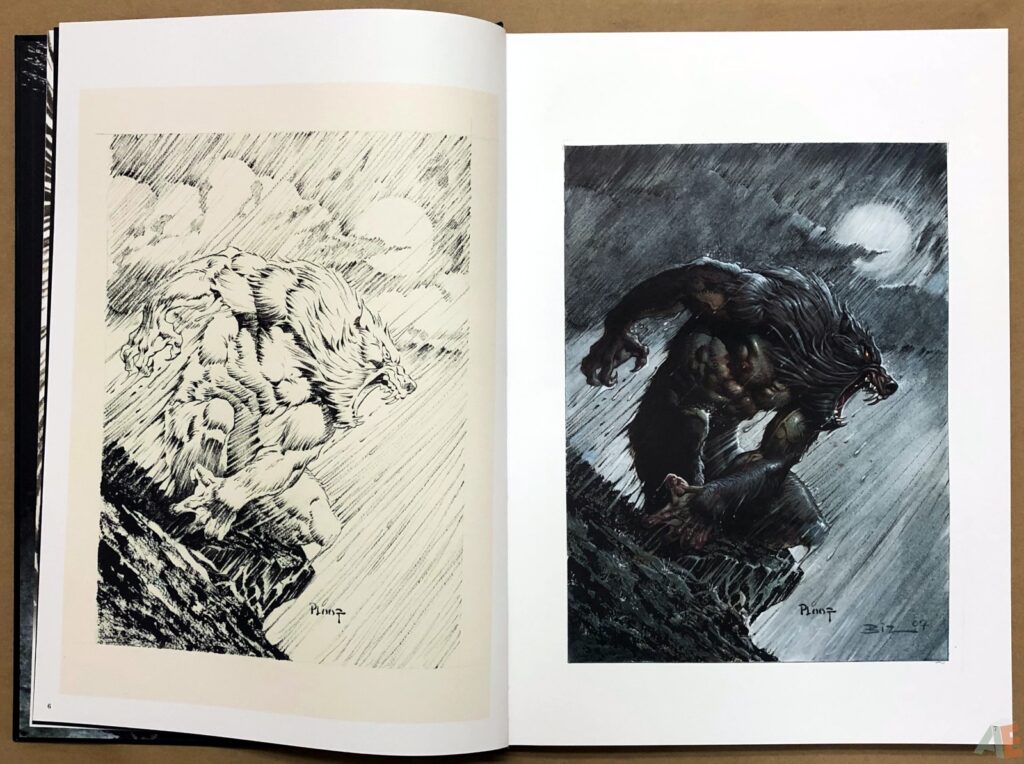 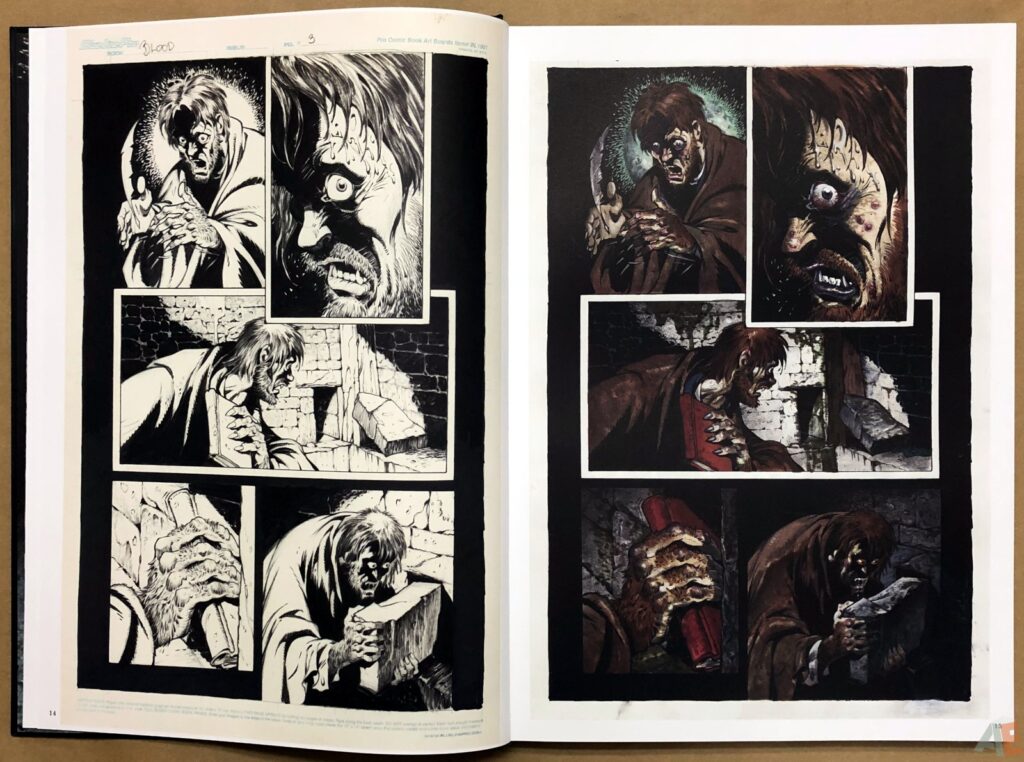 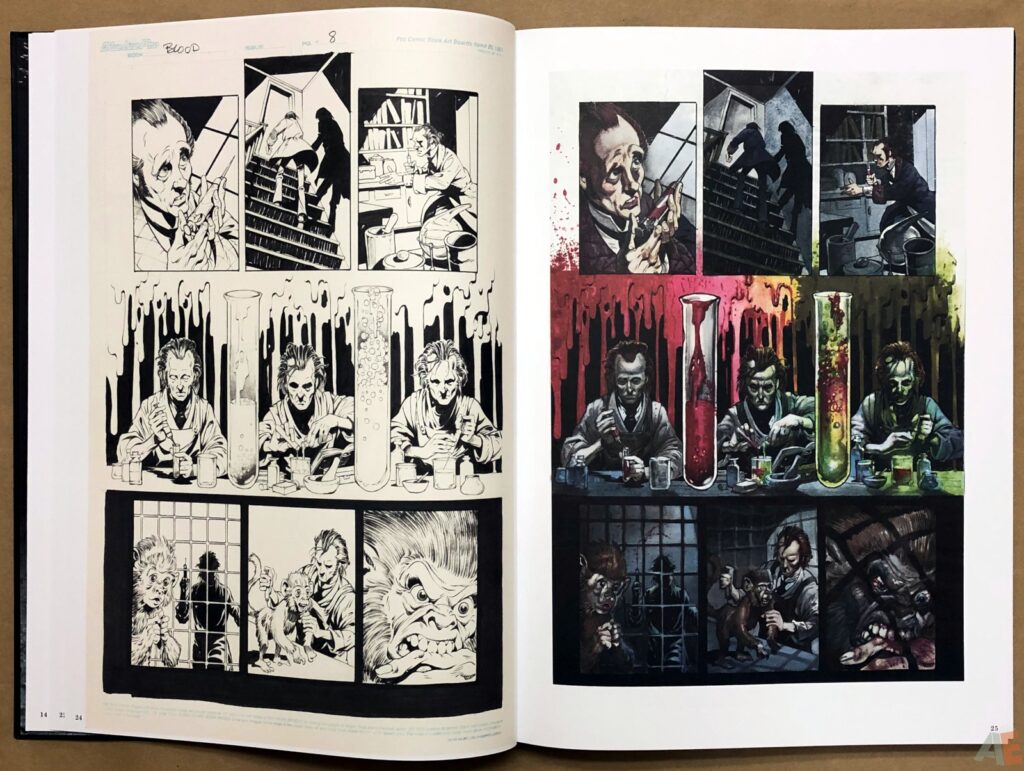 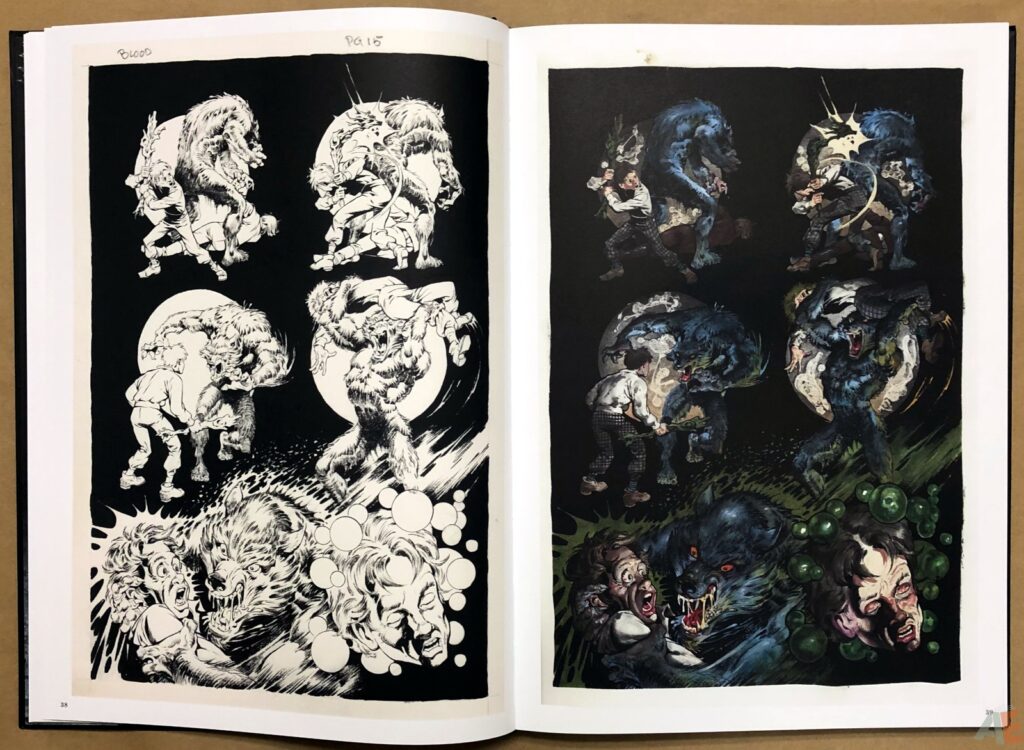 Something new to the AE format market: a painted work collected with its inked page in a side by side comparison. This book collects the three issues of Thicker Than Blood, along with all covers. Also included are forewords from the creative team and an introduction by the publisher.

Scans are consistently good: clear and sharp. It takes a moment to adjust to viewing an inked page on the left and that same page painted on the right. There are no margin notes, save for the issue number and page, and surprisingly, no correction fluid. Blacks show some gradients. 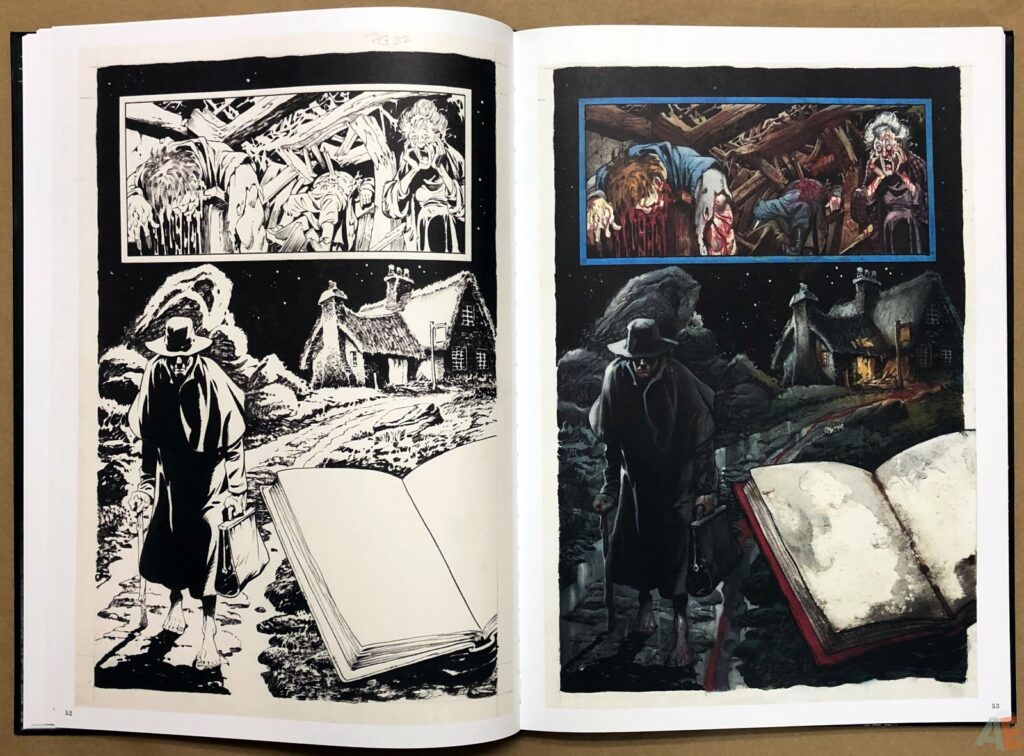 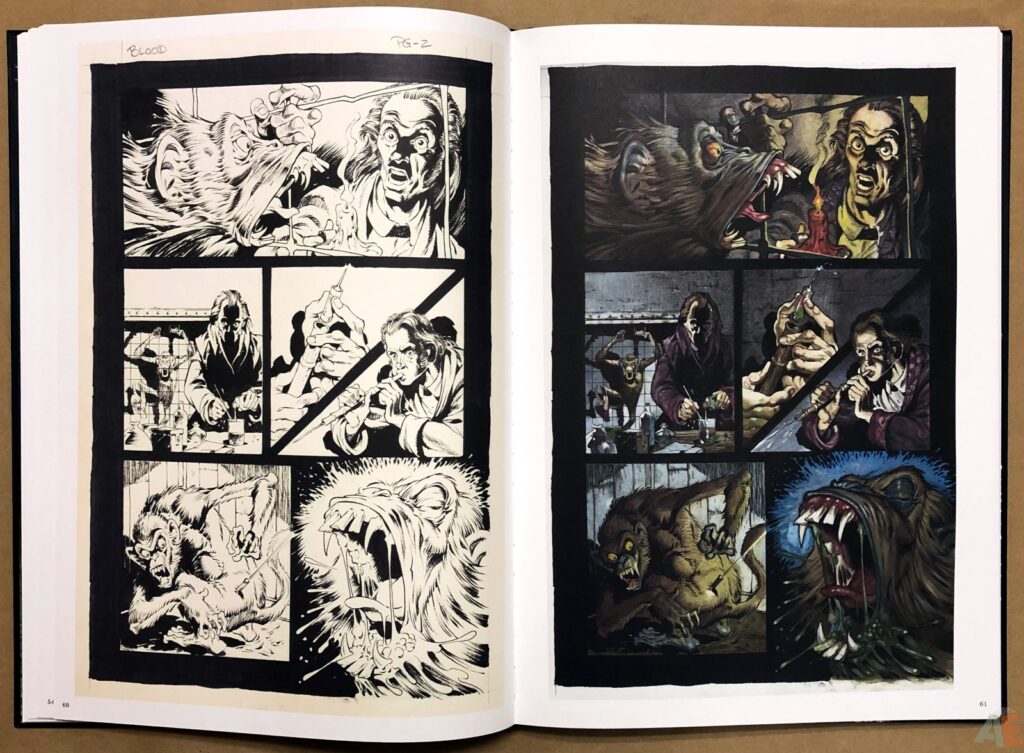 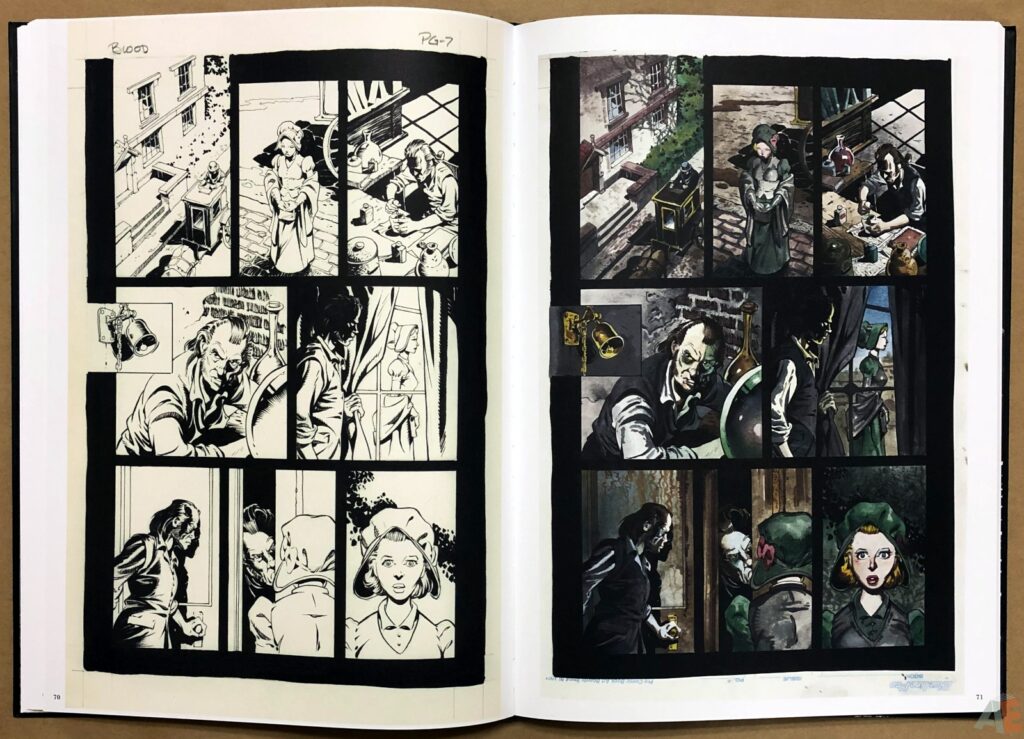 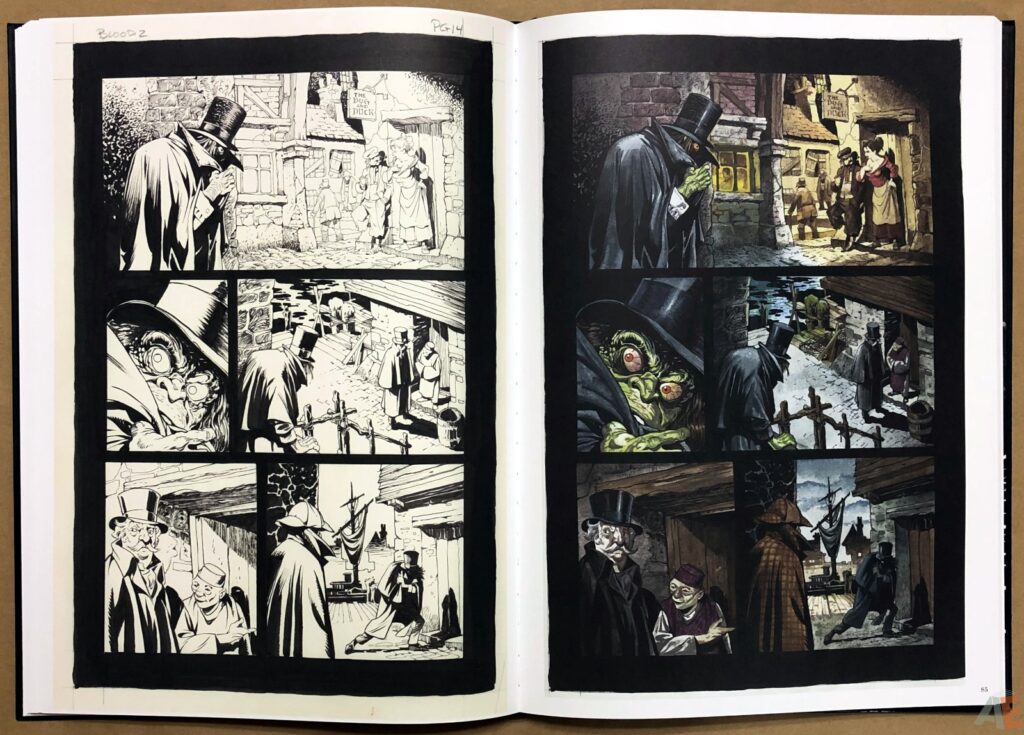 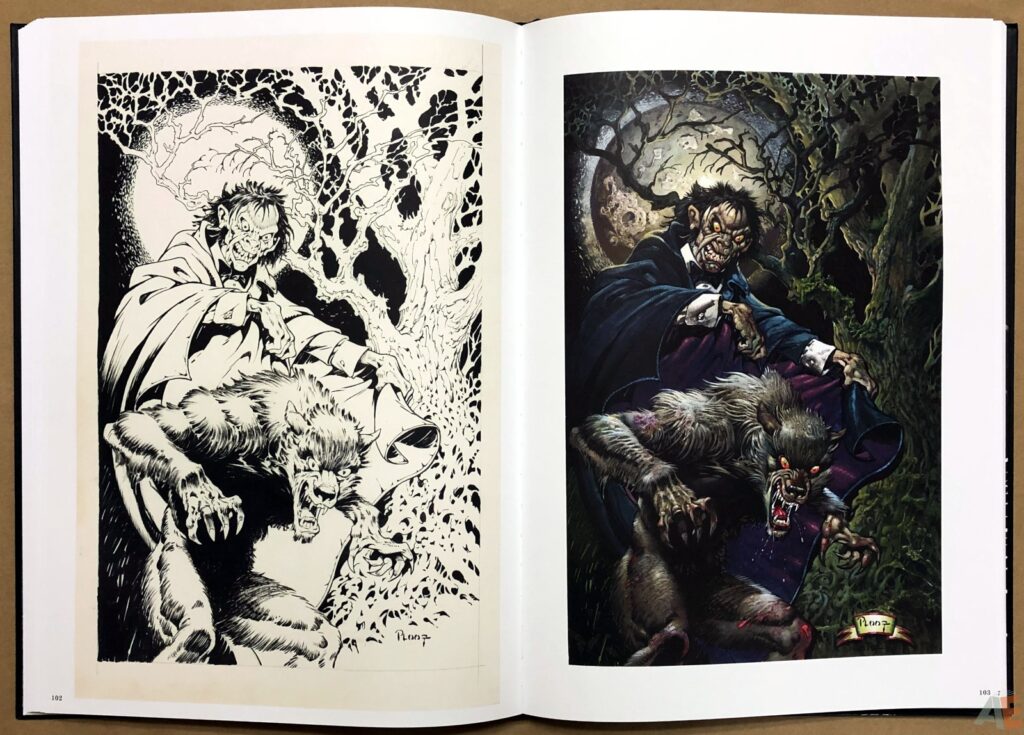 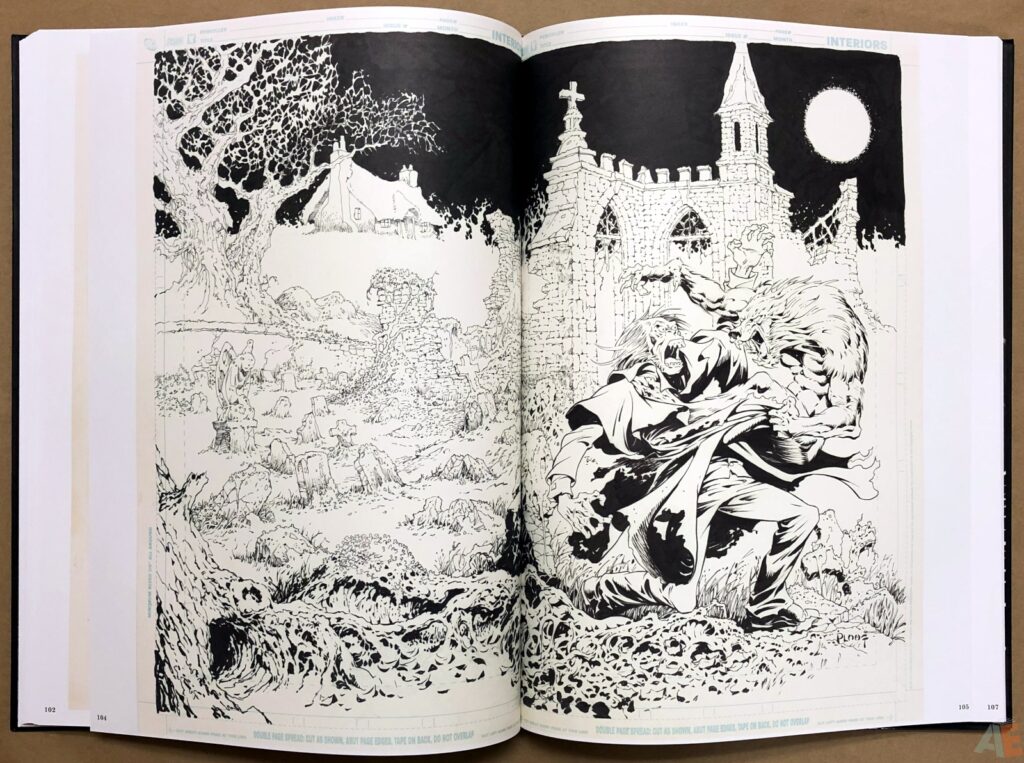 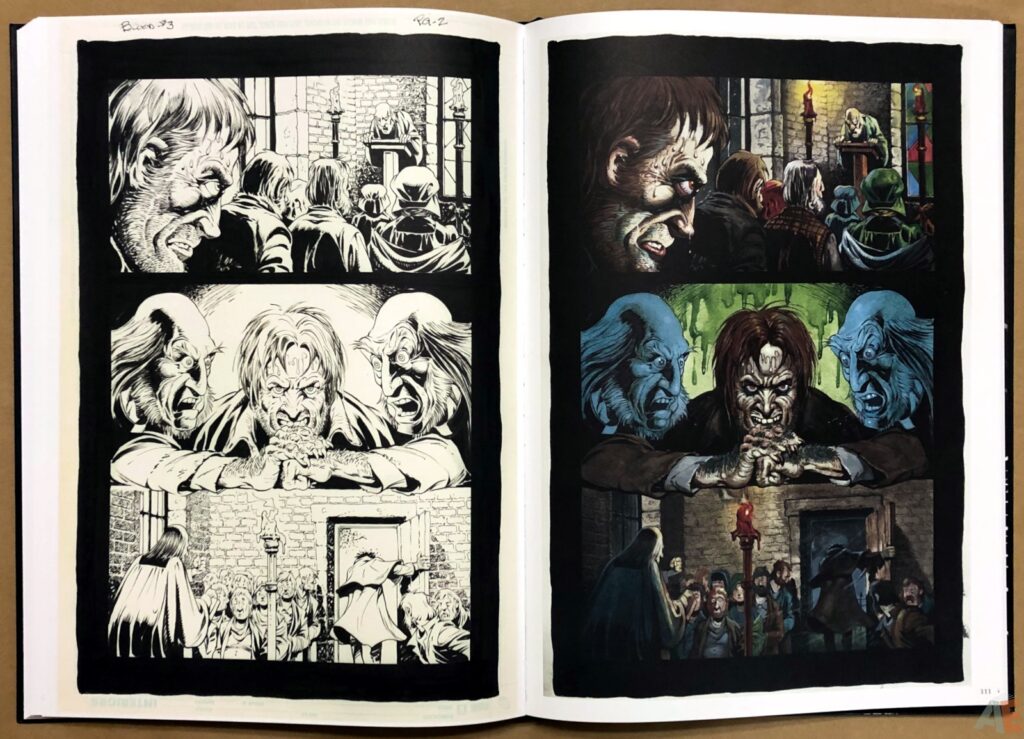 The design is simple and effective, with title page, colophon, and table of contents using enlarged images on a white background. The forewords and introduction switch to a dark background with image and white text. There are pages numbers along the bottom outer side if there is room: it appears Ploog used paper of varying width. No frontispiece but a white page. The multiple covers serve admirably as chapter dividers.

Production is excellent, with a sewn binding of heavy matte paper stock. Pages lay flat except where the signatures are glued together. The book comes shrinkwrapped in a cardboard case with a large colour sticker showing the cover image and UPC.

It would have been nice to have the word balloons added to either part of the art, but the Kickstarter included a trade paperback of the comic so you can “read” along between the two. As well closing out with a short biography instead of six comic covers would better serve this volume. 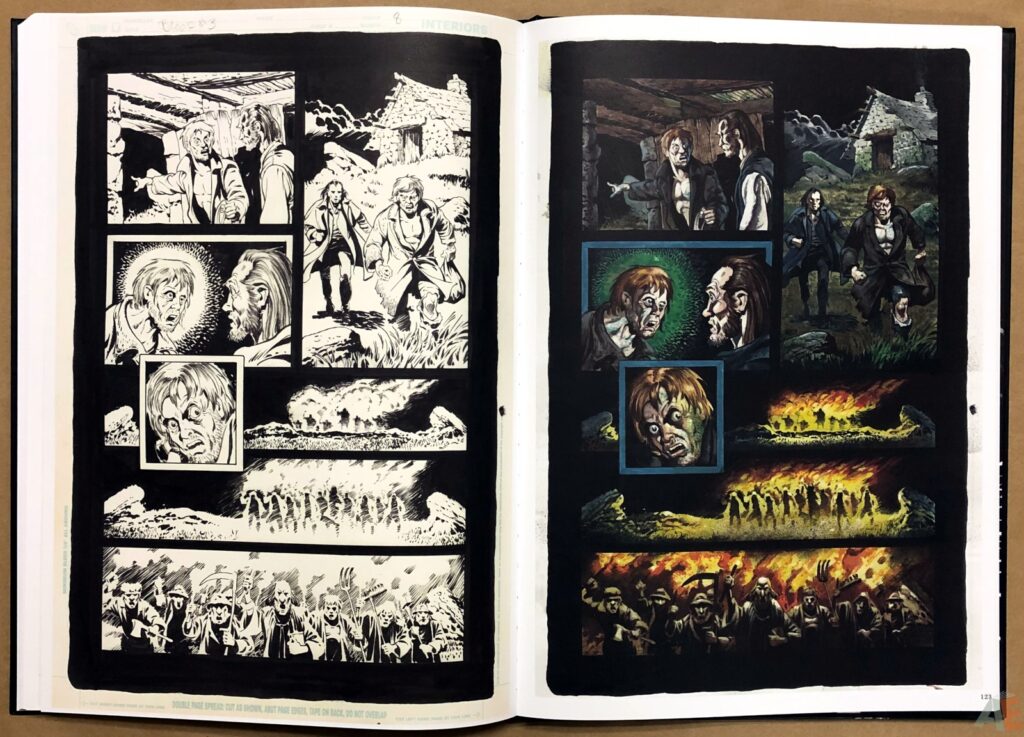 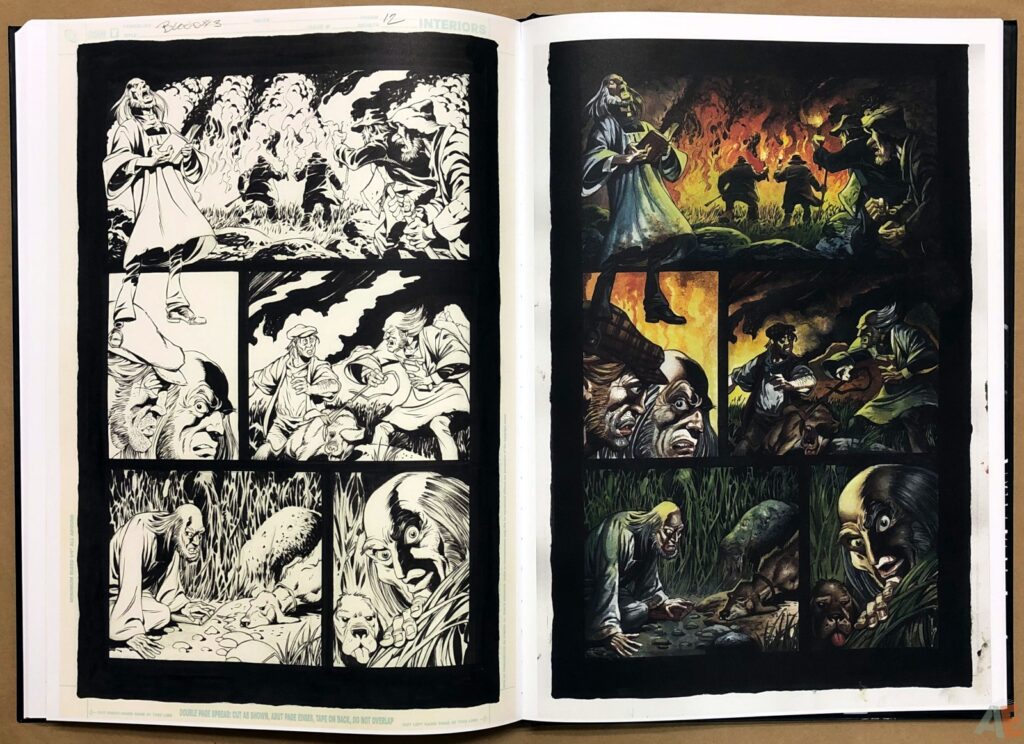 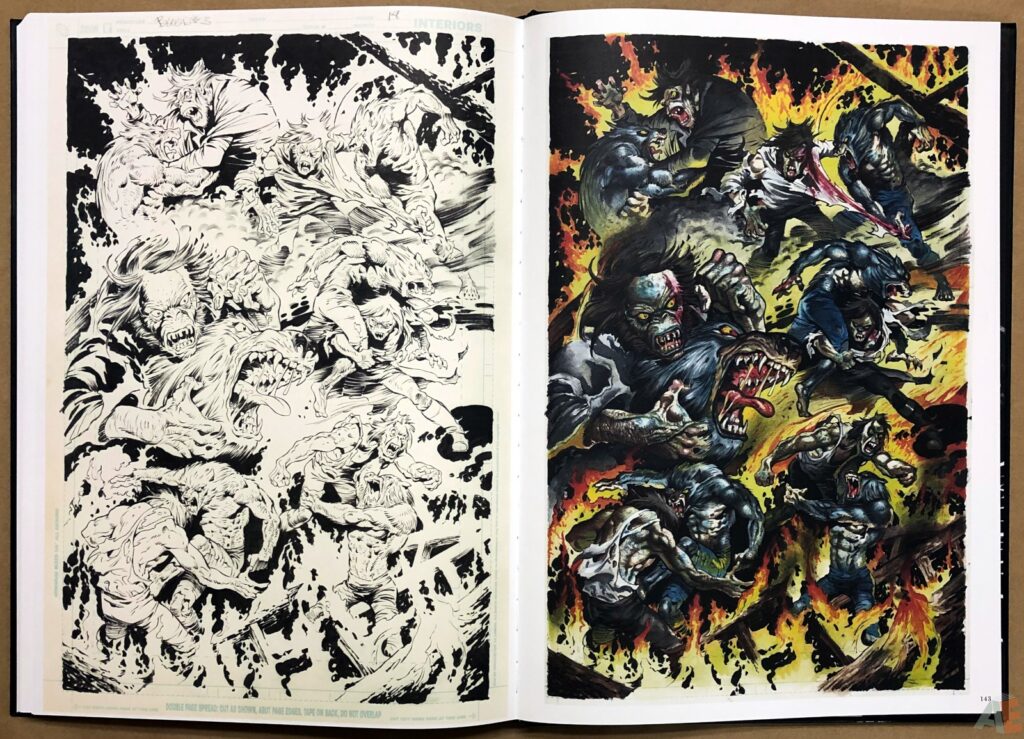 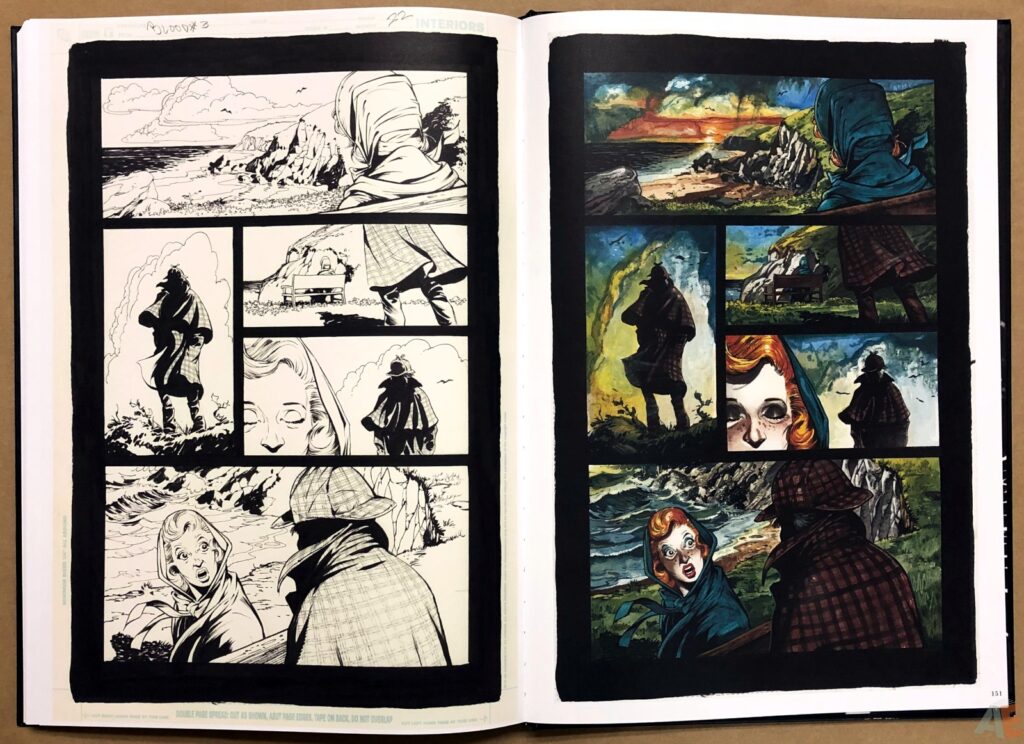 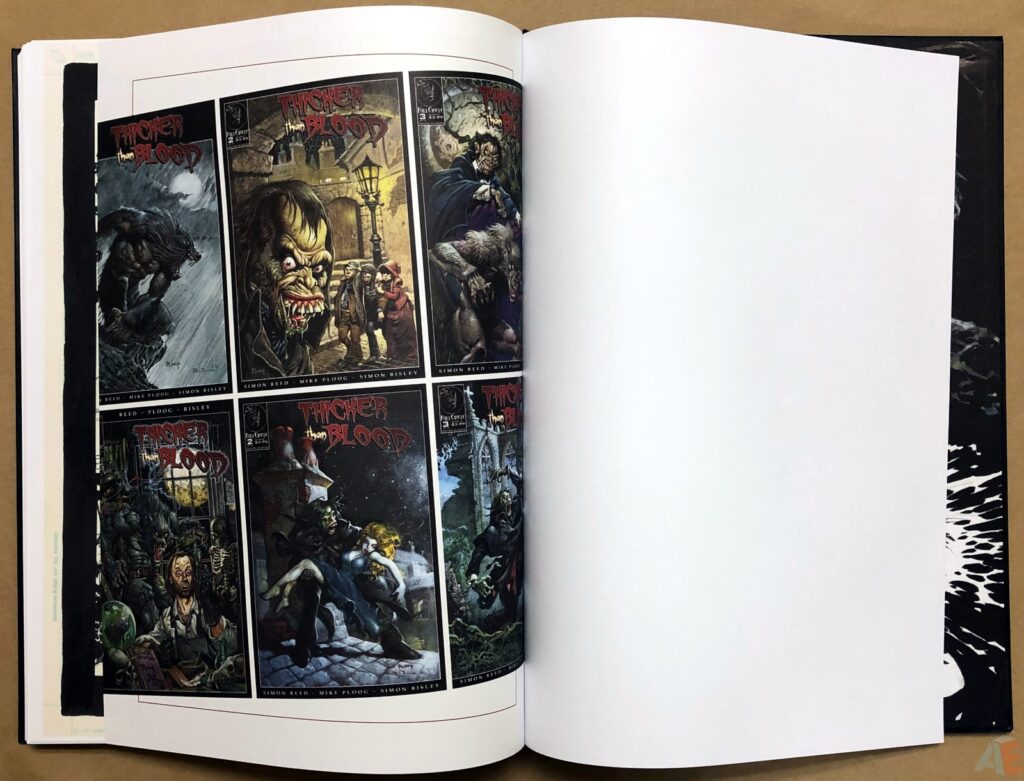 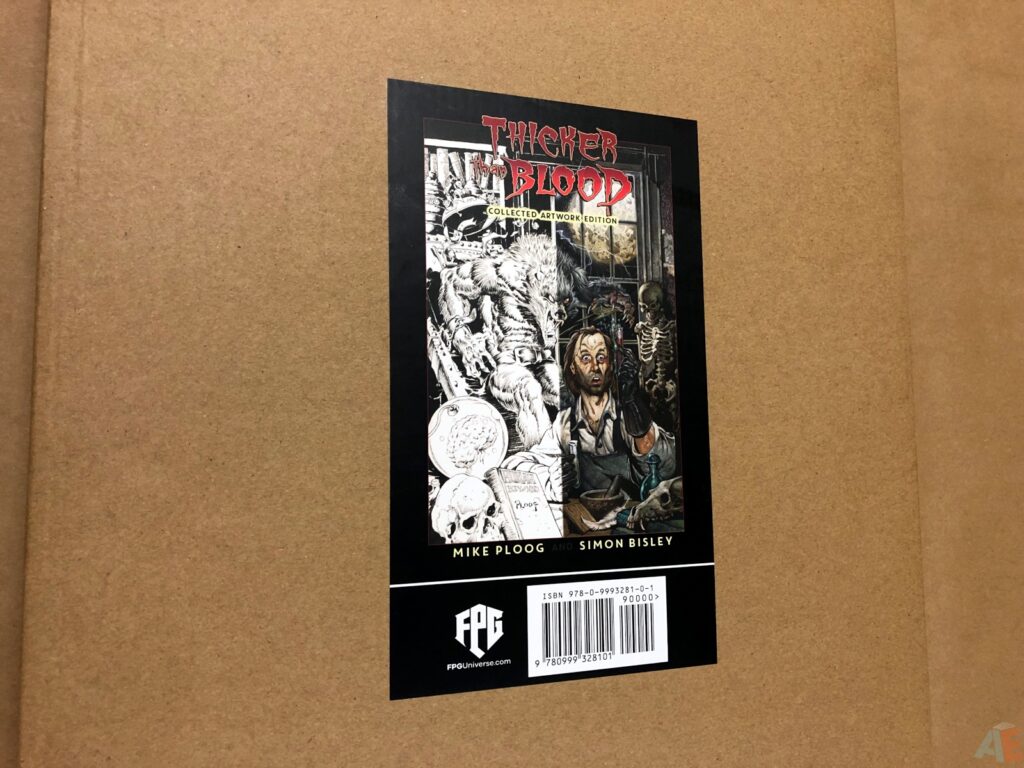 It’s great to see a new publisher enter the AE format market. It’s clear Friedlander looked at existing volumes and determined how best to format the book. Table of contents, page numbers, and a very large colour sticker alone with the heavy matte paper stock and sewn binding are a winning combination.

There was a significant delay from the proposed shipping date of December 2017 to when people actually received their Kickstarter editions in August 2018. While it was solicited in Previews for distribution to comic shops only the signed and numbered slipcased edition saw a release September 12, 2018. For the standard edition, Diamond currently lists the item status as hasn’t shipped and the ship date as TBD. I contacted FPG and received this response.

All copies Diamond ordered were shipped quite a while back. They may reorder copies whenever they like but the books have shipped through them already. Twice.

That would make sense if Diamond only ordered the signed and numbered editions, but that seems unlikely. As with most crowdfunded books, the best way to get them after release is directly from the publisher.

Thicker Than Blood Collected Artwork Ed
from Things From Another World

Scott works in I.T. but lives to eat and read. His other ramblings can be found at Comic Book Daily and eBabble. Modest art collection at Comic Art Fans.

Undertaker V2: The Dance of the Vultures