In March 2017 I took a look at announced or solicited AE format books that had yet to materialize in AE MIA: Missing After Announcing. Thankfully two from last year’s list have seen publication, so there is hope! If a book is still actively scheduled through Diamond, such as Dynamite’s Best Of Vampirella Art Edition, it won’t be part of this list. As well, if a book hasn’t had any mention since the last MIA it won’t appear here, such as Carl Barks Uncle Scrooge Artifact Edition.

The Artist’s Edition format has only been around for eight years, but it’s already garnered some missing in action volumes. Publishers like to announce upcoming books at conventions or through advance book solicitations, but then they never materialize. Let’s take a look at what has been announced but yet to see print. 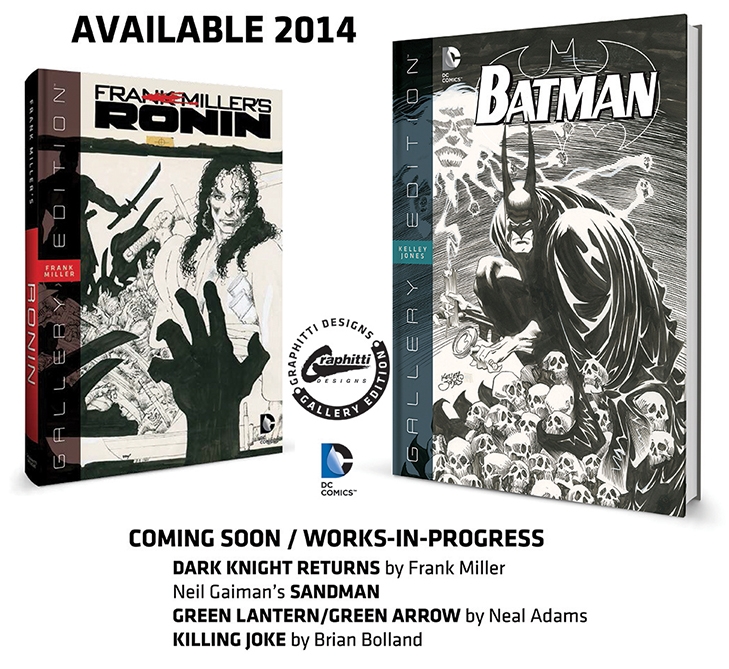 When Graphitti Designs launched their Gallery Edition line the graphic above was used. The last two have yet to see print, Green Lantern/Green Arrow by Neal Adams and Killing Joke by Brian Bolland, but there’s always hope. The collection of original art for these volumes can be a long and arduous task; something to keep in mind as you continue reading. 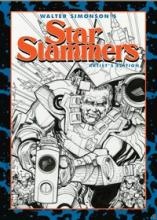 “My last experience with an Artist’s Edition was so positive,” said Simonson, “how could I possibly refuse when asked to do the Slammers!”

Unfortunately this didn’t happen, and instead, a deluxe hardcover was released, Star Slammers The Complete Collection. Simonson had this to say.

In general, I don’t sell my artwork, but in the last 2-3 years now, there’s been a movement in hardcopy to put out facsimile editions of art collections. Scott wanted to do a Star Slammers Artist’s Edition, but we decided to re-release it in a traditional comic book form.

This one looks most definitely dead. 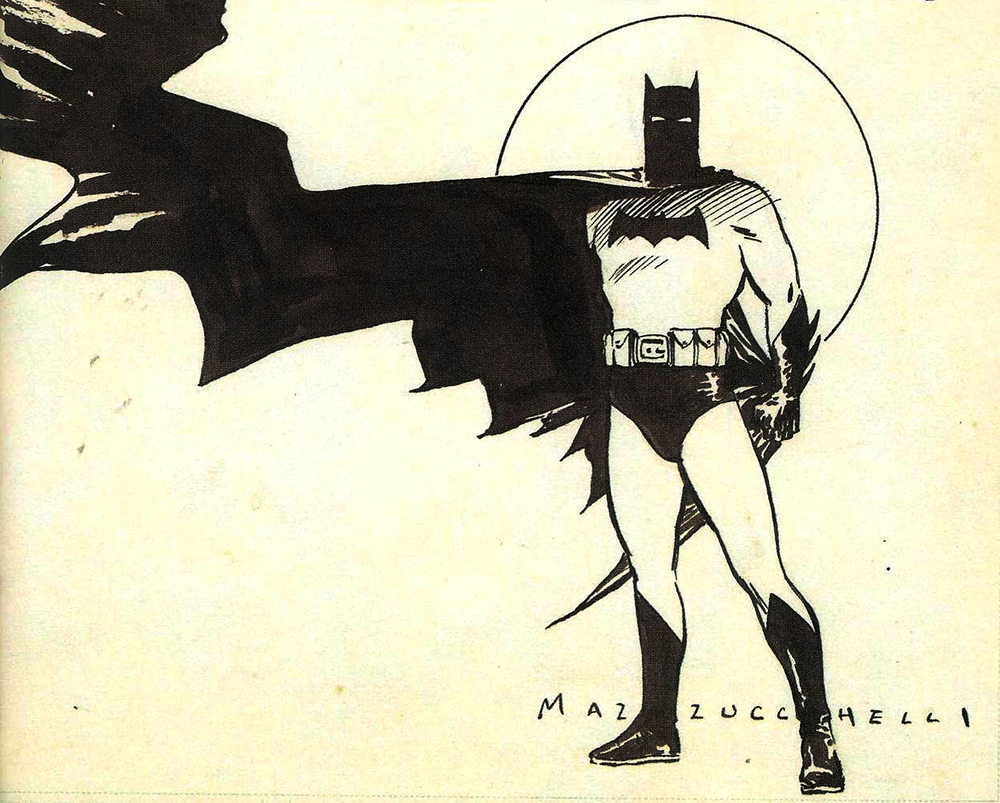 Batman: Year One by David Mazzucchelli and Frank Miller has long been clamoured for. Felix Lu asked Bob Chapman of Graphitti Designs on his podcast about a Gallery Edition. Here’s my summary from that post.

A few key points in the interview. A Batman: Year One David Mazzucchelli Gallery Edition will be published at some point. Chapman was asked by DC to wait for the Absolute Batman: Year One to run its course. Released in November 2016, I’d say it’s done what it will.

Arguably the most anticipated original art volume. Let’s hope for 2019!

If you are a fan of classic 1980s G.I. JOE comic books, this is your holy grail! Complete stories from Issues #1, 2, 21 (Silent Interlude), 24, 26 (Origin of Snake Eyes), and G. I. JOE Yearbook #2 are all represented in this Artist’s Edition. Plus an amazing cover gallery, featuring many of the best covers in the run. Again, if you love G.I. JOE, this is the book you’ve been waiting for!

I asked Scott Dunbier about this one, and the answer was quite surprising. So far this is the only Artist’s Edition to be cancelled after solicitation.

What caused the G.I. Joe Artifact Edition to be cancelled?

We did get the G.I. Joe Yearbook #2 as a portfolio. This one is dead. 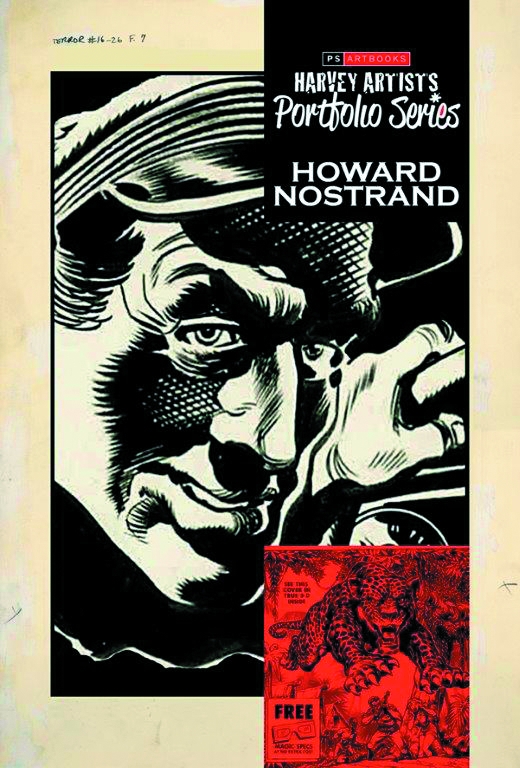 Here’s a thing, comic-fans. A 17″x12″ in-depth look into the mesmerizing work of Harvey Horror wunderkind Howard Nostrum featuring original b&w material (much of it not previously seen), and all produced in a state-of-the-art full color print process and boasting a Foreword from Roy Thomas plus an Introduction from Peter “From The Tomb” Normanton. You know, when it comes right down to it, choosing between the work that finally saw print in the individual comicbooks and this groundbreaking behind-the-scenes stuff and those stories! Wow. Limited edition of 500 copies.

I followed up a few times with PS Artbooks, and received a reply to my first query but nothing afterwards.

Thanks for your email.

The IDW book is the benchmark for what we are aiming to achieve. It will hopefully deliver a warts and all story of the artwork.

Unfortunately I don’t have any inside spreads to send you as the book is still in its design stage but I have attached the front cover and the release sheet which will hopefully provide you with more information about this title which we are quite excited about releasing, as its different to our previous publications.

Only the second AE format book to be cancelled after solicitation. Dead. 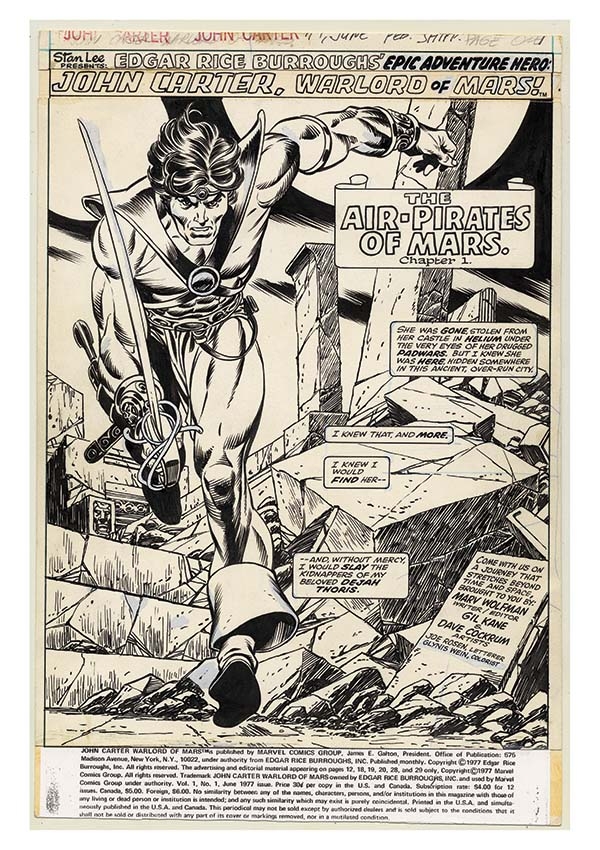 In 2014 Dynamite announced three additions to their Art Edition line, and two of those have been released. We’re still waiting for John Carter: Warlord of Mars – The Marvel Years Art Edition. Here’s the announcement. No covers were included, just samples of the original art.

“We are very pleased that our new licensing agreement with Dynamite Entertainment not only creates a fully new John Carter: Warlord of Mars comic book line, but also encompasses the reproduction of the rich, vibrant art of earlier periods by many masters of the medium”, says James Sullos, President of Edgar Rice Burroughs, Inc.  “These are some of the legendary artists who contributed so much to comic art.  I know that fans everywhere will want to add this beautiful edition to their collections”.

The Best Of Vampirella has been delayed so many times Walter Simonson’s Battlestar Galactica Art Edition was announced and released in the interim. Once that clears the pipe perhaps we’ll see the John Carter edition.

This one has lingered so long Diamond cancelled it. Steranko Nick Fury and Captain America Artist’s Edition was solicited in 2014 and languished for several years until Diamond considered it cancelled in 2017.

The first Steranko Marvel Artist’s Edition was a runaway critical and commercial hit, collecting the innovative artist’s initial foray into the world of Nick Fury and showcased his outstanding sense of design and revolutionary storytelling techniques.

Now, IDW Publishing proudly presents the second half of Steranko’s Marvel work, when he was at the very peak of his artistic powers, producing the stories that built his reputation and made him the renowned creator he is.

As with the first Steranko Artist’s Edition, the artist is handling all the design chores himself, making this truly a complete Steranko production!

Many, many posts on the forum have been dedicated to this volume. Steranko when asked always replies it’s almost done. Scott Dunbier stated at the SDCC 2018 AE panel the book is ready to go and waiting for Steranko’s portion. That would be the cover, indices, table of contents and chapter dividers.

I really don’t know if we’ll ever see this, so long as Steranko is holding it up.

Mark Schultz’s Xenozoic Tales will also be assembled as a Curator’s Collection. Randy Dahlk, who’s designed most of the IDW Artist Editions, will be working on this one with me, taking over the design and assisting with editorial. This is essentially the companion volume to Xenozoic Tales Artist’s Edition that IDW published in 2013, which comprises issues nine through 14. Our Curator’s Collection will be titled Prehistoric Xenozoic, and will contain issues one through eight of the original Kitchen Sink Press run. It’ll be accompanied by an interview about process with Mark and some other bits. Since this was a cornerstone Kitchen Sink Books title originally, Mark and Denis both wanted to see it fall under the KSP imprint.

Now we’re getting into mentions instead of announcements, so this will be brief.

Hey, Rent! HAPPY HOLIDAYS, amigo! At the moment, the RED TIDE ARTIST'S EDITION material is in the capable hands of Dark Horse chief MIKE RICHARDSON! I'll phone him this week and let you know next what the plan is on next week's TNT! Stay cool!

A reworked Red Tide from Dark Horse has long been in the not-too-distant future, but it’s right there with Steranko Nick Fury and Captain America Artist’s Edition. That tweet is the first mention I’ve seen of an Artist’s Edition format for the book. Here’s a blurb from the Dark Horse website, and the cover of the preview from 2011. 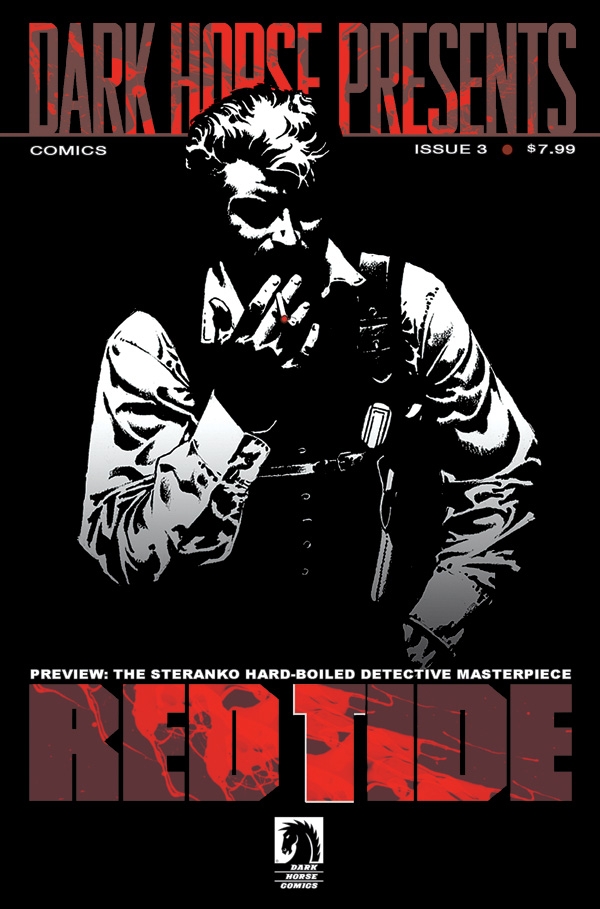 Unfortunately, we’ve had to push back the release of Red Tide. Steranko has decided to not only rewrite and redraw sections of it, be he’s now recoloring the entire thing by himself as well. We’re working very closely with him to see that Red Tide gets out sooner rather than later, but he’s taken on a LOT of responsibility by doing everything himself. However, from the reworked pages that we’ve seen, it will definitely be worth the wait. This is going to be Steranko’s best work! Please be patient and keep an eye on our website and Previews for more information concerning Red Tide.